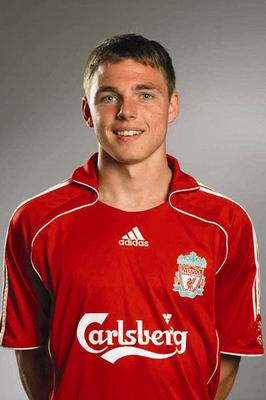 Liverpool born Adam Hammill is just another of the talented lads Liverpool's Academy has produced. The both footed winger hasn't yet made an appearance for the senior side but has had succesful loan moves with Dunfirmline and Southampton, he is also currently out on loan with Championship side Blackpool until the end of the year.

His pace down either flank has encouraged the Liverpool staff to offer him a contract until 2011, which shows faith in him from manager Rafa Benitez. Hammill's first signs of brilliance came in the 2006 youth cup where he scored a goal from his own half against Carlisle. He went on to play a big part in that tournament and was part of the winning team against Man City.

Upon getting the call up to Melwood he also won his first cap for the England U-19s. He's been improving during his short spell at Melwood and it looks like he could be playing a big part for Liverpool Football Club in the future.