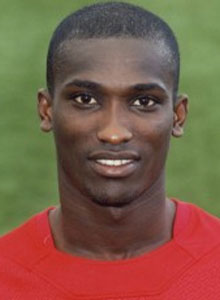 Godwin Antwi was signed in the summer of 2005 from Spanish side Real Zaragoza but has still failed to break into the first team at Anfield.

After the big centre back impressed for Liverpool's youth and reserve sides he found himself loaned out on numerous occasions to sides in the lower leagues. It started out with a loan move to Accrington Stanley at the back end of the 06-07 season and then in 07-08 he found himself at Victoria Park with Hartlepool United, where he scored his first professional goal.

The 2008-09 season saw the Ghanaian loaned out to Ronnie Moore's Tranmere Rovers in League One where Antwi impressed but also found himself on the injury list more than he would have liked.

It's difficult to see the 2006 youth cup winner breaking into the first team ahead of Jamie Carragher, Martin Skrtel, Daniel Agger and Sami Hyypia which will probably mean he'll have to move on but having impressed during his loan spells there should be a whole host of clubs looking for his signature.