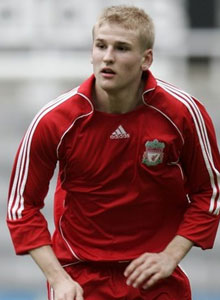 Robbie Threlfall is a very talented left back who graduated from Liverpool's Academy in 2006. He was also taken to the tour of Asia with the first team in 2007, though still hasn't made a competitive debut for Liverpool.

His form in the youth side has been exceptional though and scored in both youth cup finals in 06 and 07. He also scored an own goal in the first leg of the 07 final against Man United but his goal in the second leg took the game to penalties. He converted his spot kick and was superb throughout the game.

After spending some of last season on loan at Hereford he's returned to the League 1 side until January 2009, where he'll be hoping to impress Rafa Benitez to give him his chance at Anfield